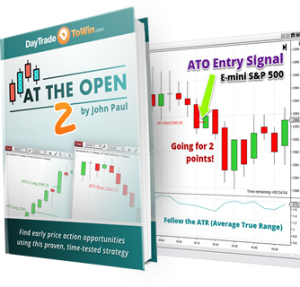 At the Open, or ATO as it’s sometimes called, is a trading strategy created by DayTradeToWin.com. The strategy focuses on finding morning trading opportunities in the E-mini S&P and other markets. Typically, the E-mini and similar futures start to “take off” around 9:30 a.m. US/Eastern. For the first couple hours of the day, volatility is typically the best for trading. When volatility begins to increase at the market open time, there is often a breakout trading opportunity. This forms the basis of what the ATO is all about.

Price action is using the information directly on your chart to trade – no indicators. That’s the goal of DayTradeToWin’s trading courses. The ATO can be traded by using price action or the accompanying indicator software for NinjaTrader. Normally, after learning from the course and the live training, you manually look for trades as each candle plots on a 5-min chart. The software does the looking for you. When a valid ATO trade is found, a signal appears and an optional alert sound is played. In addition, a line is drawn that points to the entry candle. At that point, it’s up to you to place the trade according to the rules.

Like other courses in DayTradeToWin’s lineup, the ATO uses the ATR (Average True Range) for profit targets and stop losses. The philosophy is that the market can realistically only produce so much potential profit at one time based on its recent volatility. As such, a trader’s expectations should be inline with a measure of this potential. That’s where the ATR comes into play – it’s a measure of recent volatility. According to the ATO method, A simple mental formula is all it takes to decide what you’re profit target should be. The stop loss is also calculated using the ATR.

On average, a trader can hope for a couple of ATO trades per day. A written course fully discloses all elements of the strategy. The live trading further solidifies understanding. Email support is included. After purchase, you can expect email delivery within an hour or so. A training video is provided soon after. Some traders may be able to learn the strategy in a single day.

The ATO 2 software has been optimized for NinjaTrader 8. The indicator’s settings look great on both dark and light skins. Performance seems to be faster compared to the previous NinjaTrader 7 version. Overall, it’s easy to see why the ATO has returned to the forefront of DayTradeToWin.com’s lineup.

The ATO (At the Open) was DayTradeToWin.com’s first publicly released trading strategy. As a flagship product, the course became very popular. It paved the way for additional signal software such as the Atlas Line and Trade Scalper. Eventually, the ATO was made exclusive to the eight-week coaching program called Private Mentorship. Very recently, the ATO 2 was released for NinjaTrader 8 with considerable improvements.

Read on to get an idea of ATO 2 basics seen in this video and how it can improve your trading. The E-mini trade here was worth seven ticks. That equals $87.50 in profit before commissions and other trading costs. Multiply that profit by the number of contracts trade to get an idea of potential profits. Of course, each traders ability to invest greater amounts depends on personal risk capital. Trading is risky. Only trade with money you can afford to lose.

Traditionally, markets have greater volatility at various periods of the day. In the United States, for quite a long time, trading markets opened at 9:30 a.m. US/Eastern. Although markets are electronically traded these days, companies and trading systems continue the 9:30 a.m. tradition for markets like the E-mini S&P. If you open an E-mini S&P chart, you will generally see slower activity prior to 9:30 a.m. US/Eastern, followed by a substantial increase for the next hour, at least. During this first hour or so, conditions are often ideal for trading. This is where the ATO 2 steps in.

The ATO 2 is a pattern of price activity that you’re taught how to identify. By looking at a chart’s price activity, you will be able to see specific candle formations that constitute a trading opportunity, also called a “setup.” The ATO 2 can be classified as a breakout strategy. That means you are waiting for price to break out of a specific range. Once this occurs, you can place a trade. The ATO 2 package includes an indicator programmed for NinjaTrader 8. This indicator plots a signal letting you know when to place a trade. This signal also indicates the expected market direction. Instead of manually looking for the trades yourself, the software automatically finds trades and tells you when to enter (place the trade).

Exiting the trade must be manually done by the trader. You are taught the profit target and stop loss strategy. In short, you will place the profit target relative to current market conditions. If the market is more volatile, then it’s able to potentially produce more profit, so that means a larger profit target. Similarly, a more volatile market may fluctuate more, so that means the stop loss is also increased to prevent premature exiting. The included live training and training video covers everything you need to know.

The ATO 2 works with futures and forex markets. The software is expected to soon support MetaTrader (the world’s most popular forex trading platform), so stay tuned for updates.

At the Open, or ATO as it's sometimes called, is a trading strategy created by DayTradeToWin.com. The strategy focuses on finding morning trading opportunities in the E-mini S&P and other markets. Typically, the E-mini and similar futures start to "take off" around 9:30 a.m. US/Eastern. For the first couple hours of the day, volatility is typically the best for trading. When volatility begins to increase at the market open time, there is often a breakout trading opportunity. This forms the basis of what the ATO is all about. Price action is using the information directly on your chart to trade…
At the Open (ATO 2)
At the Open (ATO 2)
John Paul
It's one of those strategies that every trader who trades futures should definitely take a look at. It's very solid. ATO 2 indicator is easy to use. Support is responsive.

It's one of those strategies that every trader who trades futures should definitely take a look at. It's very solid. ATO 2 indicator is easy to use. Support is responsive.

Part 2 – How To Connect to a NinjaTrader 8 Data Feed

Part 3 – How to Open a Chart in NinjaTrader 8

Part 5 – How to Install Indicators Into Ninjatrader 8

Part 6 – How to Save Indicator Settings (Presets)

Part 7 – How to License Indicators in NinjaTrader 8

Part 8 – How to Remove an Indicator in NinjaTrader 8

Part 9 – How to Use a SuperDOM in NinjaTrader 8

Part 10 – How to Roll Over Futures Contracts in NinjaTrader 8

Part 11 – How to Use NinjaTrader 8’s Market Replay

Part 12 – How to Fix Data Problems in NinjaTrader 8

Part 13 – How to Back up Your NinjaTrader 8 Settings

Part 14 – How to Track Trading Performance in NinjaTrader 8

Part 15 – How to Use Chart Tabs in NinjaTrader 8

The content at this site was created by DayTradeToWin or its affiliates. The author(s) may have been directly or indirectly compensated for the content. All content should be should be treated as an advertisement. Trading is inherently risky and substantial financial loss can occur. Hypothetical performance is not indicative of future results. Results may vary due to the unpredictable nature of the markets, slippage, user behavior, geographical distance to data centers, and other factors.

CFTC RULE 4.41 – HYPOTHETICAL OR SIMULATED PERFORMANCE RESULTS HAVE CERTAIN LIMITATIONS. UNLIKE AN ACTUAL PERFORMANCE RECORD, SIMULATED RESULTS DO NOT REPRESENT ACTUAL TRADING. ALSO, SINCE THE TRADES HAVE NOT BEEN EXECUTED, THE RESULTS MAY HAVE UNDER-OR-OVER COMPENSATED FOR THE IMPACT, IF ANY, OF CERTAIN MARKET FACTORS, SUCH AS LACK OF LIQUIDITY. SIMULATED TRADING PROGRAMS IN GENERAL ARE ALSO SUBJECT TO THE FACT THAT THEY ARE DESIGNED WITH THE BENEFIT OF HINDSIGHT. NO REPRESENTATION IS BEING MADE THAT ANY ACCOUNT WILL OR IS LIKELY TO ACHIEVE PROFIT OR LOSSES SIMILAR TO THOSE SHOWN.

GOVERNMENT REGULATIONS REQUIRE DISCLOSURE OF THE FACT THAT WHILE THESE METHODS MAY HAVE WORKED IN THE PAST, PAST RESULTS ARE NOT NECESSARILY INDICATIVE OF FUTURE RESULTS. WHILE THERE IS A POTENTIAL FOR PROFITS THERE IS ALSO A RISK OF LOSS. A LOSS INCURRED IN CONNECTION WITH TRADING FUTURES CONTRACTS CAN BE SIGNIFICANT. YOU SHOULD THEREFORE CAREFULLY CONSIDER WHETHER SUCH TRADING IS SUITABLE FOR YOU IN LIGHT OF YOUR FINANCIAL CONDITION SINCE ALL SPECULATIVE TRADING IS INHERENTLY RISKY AND SHOULD ONLY BE UNDERTAKEN BY INDIVIDUALS WITH ADEQUATE RISK CAPITAL.

ANY ADVISORY OR SIGNAL GENERATED BY DAY TRADE TO WIN IS PROVIDED FOR EDUCATIONAL PURPOSED ONLY. ANY TRADES PLACED UPON RELIANCE ON WWW.DAYTRADETOWIN.COM SYSTEMS ARE TAKEN AT YOUR OWN RISK FOR YOUR OWN ACCOUNT. PAST PERFORMANCE IS NO GUARANTEE OF FUTURE RESULTS. WHILE THERE IS GREAT POTENTIAL FOR REWARD TRADING COMMODITY FUTURES, THERE IS ALSO SUBSTANTIAL RISK OF LOSS IN ALL TRADING. YOU MUST DECIDE YOUR OWN SUITABILITY TO TRADE OR NOT. FUTURES RESULTS CAN NEVER BE GUARANTEED. THIS IS NOT AN OFFER TO BUY OR SELL FUTURES OR COMMODITY INTERESTS.

Handcrafted with by Surendra Soni. Powered by the Blurr Pro By Magnus7Lab. Get in Touch.